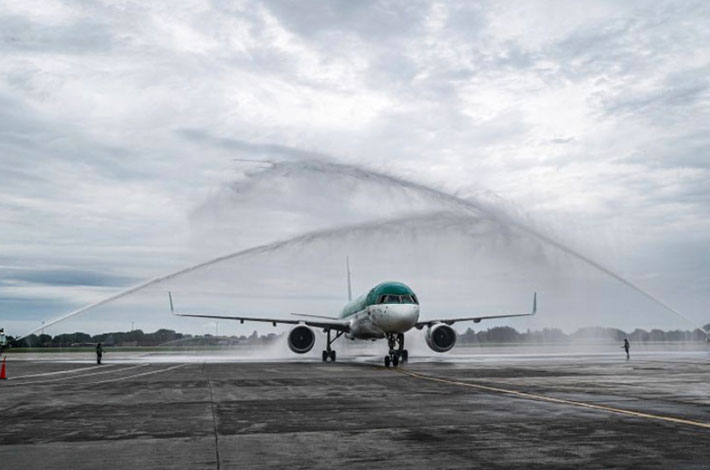 We are delighted to announce that our new route on behalf of Aer Lingus from Dublin to Minneapolis got off to a great start on July 1st. This flight marks the first direct Aer Lingus flight between the two cities.

The inaugural flight on Boeing 757 EI-LBR was crewed by ASLI Director of Flight Operations Capt. Con Murphy and First Officer Arthur Hunter-Nolan. The flight and crew received a warm welcome on arrival in Minneapolis that included a water cannon salute from the airport fire department. The route is the longest ASLI B757 route to date with a westbound scheduled block time of 8hrs 45mins and operates daily for the remainder of the year. Minneapolis is the county seat of Hennepin County and the larger of the Twin Cities, the 16th-largest metropolitan area in the United States. Minneapolis is the largest city in the state of Minnesota and 46th-largest in the United States, with an estimated population of 425,403. The Twin Cities metropolitan area consists of Minneapolis, its neighbor Saint Paul, and suburbs which altogether contain about 3.63 million people and is the third-largest economic center in the Midwest. We look forward to operating a very successful service going forward!